Hours of operation are subject to change due to weather conditions.

The West Virginia State Wildlife Center is a modern zoological facility displaying native and introduced state wildlife. Operated by the Wildlife Resources Section of the West Virginia Division of Natural Resources, the Wildlife Center is dedicated to presenting visitors a realistic and factual understanding of our state’s wildlife. Woodland wildlife can be viewed along a wheelchair-accessible interpretative trail traveling 1.25 mile through a mature hardwood forest.

The spacious enclosures allow the animals to interact with their environment and they therefore exhibit more natural behavior patterns. Interpretive signs help the visitor to learn more about each animal’s life history, biology and its relationship with humans. Group tours are available upon request.

The Wildlife Center is the perfect setting for a family outing. In addition to exhibits, there is a large wooded picnic area with grills and a shelter. Look for waterfowl or fish for trout, bass, catfish and bluegill in the well-stocked pond below the picnic area. A gift shop is available to satisfy your souvenir and refreshment needs. The Wildlife Center is a facility where visitors can see, enjoy and learn more about West Virginia’s rich wildlife heritage.

In 1923, the Game and Fish Commission purchased property in Upshur County and created the French Creek Game Farm. As its name implies, several species such as quail, pheasant, turkey and deer were raised on the area.

These species were used in an attempt to reintroduce wildlife throughout the state. As our understanding of wildlife biology and habitat requirements increased, it became evident that farm-raised animals failed to develop the necessary skills for survival in the wild and these programs were discontinued.

From the beginning, the recreational and educational values of the Game Farm were recognized by area residents. In 1926 alone, nearly 6,000 visitors came to the Game Farm to view the animals. One large crowd gathered to see three elk brought by wagon from the railroad station. By 1927, the number of registered visitors grew to 20,000. Buffalo from Oklahoma were added to the exhibit in 1954 and attracted additional visitors.

A proclamation by the President of the United States and the Governor of West Virginia created a National Hunting and Fishing Day in 1971. This event was initially celebrated at the Game Farm in 1978 and continued each year until it was moved to the Stonewall Jackson Lake State Park in 1996.

A mobile wildlife exhibit stationed at the Game Farm traversed the state from 1974 to 1990, allowing nearly 250,000 residents to catch a glimpse of its unique tenants. Ironically, the original purpose of raising wildlife at the Game Farm had been overshadowed by its popularity as a tourist attraction.

Half a century after its creation, the DNR Wildlife Resources Section decided to replace the antiquated wildlife facilities and exhibits. In 1984, monies from the Land and Water Conservation Fund of the U.S. Department of Interior were used to begin construction on new exhibits. A new facility was dedicated in September 1986 and renamed the West Virginia State Wildlife Center.

The 2nd annual Tails, Trails, and Treats event is happening at the Wildlife Center! Dress up, see the animals, and get some candy in the process. 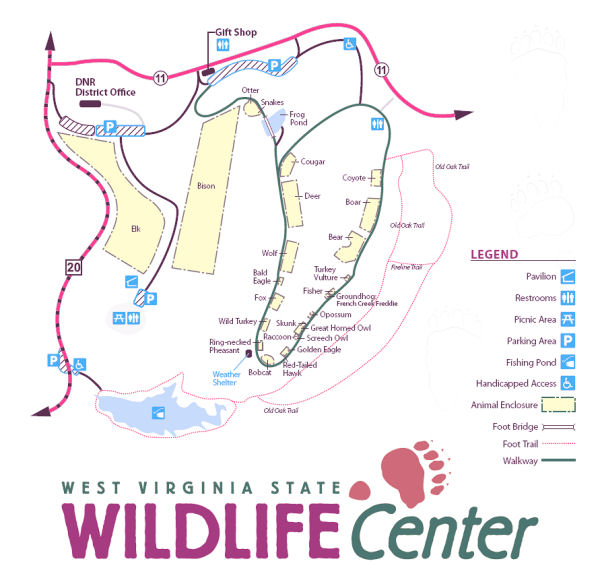 Do you have your fishing license for this winter?